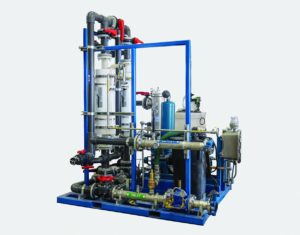 An Ohio plant that manufactures part of the cells used in the solar-power industry faced lost production after its deaerator failed, causing potential rust buildup in its powerhouse boiler. A deaerator is a device that i s widely used to remove oxygen and dissolved gases from feedwater before steam production, generally i n power boilers. Dissolved oxygen in boiler feedwater will cause serious corrosive damage i n a steam system by attaching to the walls of metal piping and other equipment and forming rust.
Chemical injection attempts to temporarily supplement the deaerator were unsuccessful in sufficiently reducing oxygen. Plant personnel knew they must immediately find a temporary yet effective solution that could be implemented while the facility replaced its permanent deaerator.

MPW quickly responded to the client’s need with the perfect solution: a mobile gas transfer membrane (GTM) skid specifically designed to reduce oxygen levels in process water. Application engineers from MPW had years of experience implementing this technology at other sites. It is especially effective because the system does not have chemical requirements and it limits operating labor.

MPW’s GTM skid allows facilities to run up to 200 gallons per minute (gpm) through the GTM contactors, reducing oxygen levels to 10 parts per billion in the effluent. Additionally, MPW provided pressure-r educing and relief valves to serve as a bypass to the GTM in order to prevent loss of flow to the boiler. Bisulfite injection was moved downstream of the GTM skid to prevent damage to the contactors. Bypass connections prevented boiler feed interruptions due to potential unexpected shutdowns. MPW supplied the following during this project:

MPW supplied the following during this project:

MPW’s quick response and expertise in industrial water technology allowed the facility to efficiently replace its deaerator. The utilization of the GTM skid produced the necessary reductions to oxygen levels while the deaerator was out of commission.

MPW’s temporary system limited operating-labor costs for the client and eliminated the need for the relatively inefficient and expensive chemical injections.

The client cited the quick response and professionalism of MPW’s team, not to mention the efficiency of MPW’s technological capabilities. MPW experienced zero safety incidents during this project.