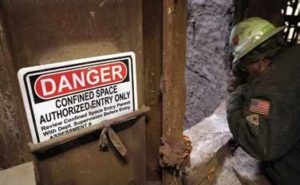 By Jimmy Peck, General Manager, MPW Industrial Services and a member of the WJTA Board of Directors

Cleaning, repairing or inspecting critical equipment often requires workers to enter small, sometimes life-threatening, spaces like tanks or pipes where they may be exposed to hazardous material. Commonly referred to as “confined spaces,” these areas are characterized by their tight configurations that may hinder the activities of any employee who must enter, work in and exit them.

Though advancements in hands-free technologies have drastically reduced the number of employee-related deaths in confined-space work environments, there are still some industries that require workers to enter such spaces, posing a major safety risk to all parties involved.

To protect employees from harm, OSHA has developed a set of requirements that govern the way employers manage confined space projects. Provisions of these standards range from posting visible danger notices to evaluating the workplace on a consistent basis and documenting any issues. However, perhaps most important is the provision that requires employers to develop and implement procedures for mobilizing rescue or emergency services in the event of a crisis.

In July 2017, three Florida underground utility workers died after losing consciousness in a 15-foot-deep drainage hole due to a buildup of hydrogen sulfide and methane. According to reports of the accident from EHS Today, the second worker entered with the intention of saving the first trapped individual but also lost consciousness. Likewise, a third man climbed into the hole and was
overcome by gas. All three workers lost their lives – none of them were wearing proper respiratory protective gear or gas monitoring equipment.

These incidents happen all too often in industrial environments, but what’s more upsetting is that accidents such as the one in Florida are entirely preventable.

OSHA defines a confined space as any environment that meets all of the following criteria:

Further, OSHA uses the term “permit-required confined space” (or permit space) to describe those spaces that both meet the definition of “confined space” and pose health or safety hazards. The Final Rule for Permit-Required Confined Spaces took effect in 1993, after years of gathering data on confined space fatalities.

Historically, when selecting a response team to support confined space efforts, many organizations partner with their local fire department and emergency crews to devise an action plan. While this solution is perfectly adequate in the eyes of OSHA, companies are often encouraged to have a group of trained professionals onsite who are ready to react immediately.

Regardless of the selected team, OSHA offers several tips for evaluating an emergency service to ensure they are capable, available and prepared. Some questions to consider include:

Increasingly, MPW has been involved in several projects that require employees to enter confined spaces, and whether it’s staff or a customer team, the risk associated with such projects called for a greater level of support from MPW. That’s why MPW started its confined space rescue training program – a rigorous four-day seminar in which team members are certified at MPW’s in-house training center. The program includes a custom-designed confined rescue maze and training tower. Here, all team members are trained in confined space rescue (per 29CFR1910.146 requirement), 40-hour HAZWOPER (per 29CRF1910.120) and CPR/AED/First Aid.

Because every confined space job is different, MPW conducts a pre-job assessment for each project to identify potential hazards and assign appropriate emergency personnel.

For instance, MPW recently worked on a customer site in which two separate rescue scenarios were identified. The confined space in question was a tank, roughly 25 feet tall and 15 feet in diameter. The tank was split vertically in two sections, an upper and lower section, caused by a screen floor in the tank.

To complete the work requested by the customer, MPW’s industrial cleaning team was required to enter the upper section, followed by the lower section to complete the job. As part of MPW’s safety training, personnel during entry were required to wear an air purifying respirator due to atmosphere hazards in addition to their normal personal protective equipment.

Thankfully, there were no injuries or incidents reported on this specific project, but the confined space rescue team was present and ready for the duration of the job – putting MPW’s workers at ease and significantly reducing potential liabilities for the customer.

No company wants to believe the unthinkable will happen – it’s human nature. But as with any dangerous situation, adequate preparation will help keep workers safe in the event of a crisis. Evaluating partner response time, improving communications among co-workers and selecting a partner that is knowledgeable of the work site and its potential hazards are the keys to mitigating risk during a confined space project.

If you have any questions regarding confined space rescue, please contact MPW confined space expert Bill Hayes at (740)928-7043 or whayes@mpwservices.com.