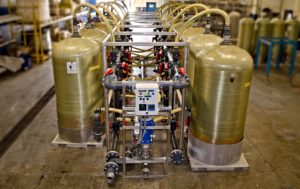 A world-renowned engineering and construction company, commissioned by an Alaskan power supplier i n the final phase of construction on its 183 MW natural gas-fired combined cycle thermal plant, faced the challenge of supplying a constant flow of ultrapure water to support steam blows during the commissioning.

Due to the plant’s isolated location and the need to exchange equipment in order to provide a constant flow of ultra-pure water, transportation became the company’s largest and most costly issue. The previously recommended solution called for every piece of equipment to be shipped from Tacoma, Washington, creating both timing issues and high costs.

MPW devised and designed a new on-site system capable of producing twice the total amount of ultrapure water compared to other available systems. This system was comprised of four 10-million-grain demineralization mobile units. Three of the units were installed on a common header system and used t o polish the condensate return. The last unit was used to purify city water into ultrapure boiler makeup water.

Because of the vast capacity of the mobile demineralization units, MPW  provided a constant flow of ultrapure water without exchanging equipment during the four-week project.

The elimination of exchanges solved the potential transportation issues, saved thousands of dollars and allowed the power supplier to commission its plant on time.