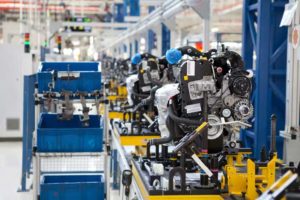 An automotive manufacturer in the Southeastern United States was struggling to find an industrial cleaning provider that could effectively cleanse the engine assembly block line cells within its mandated eight-day window of downtime.

But after touring another facility’s engine assembly block line and learning that it had been cleaned by MPW Industrial Services, an Environmental Facilities Manager decided to give MPW a try.

During the engine-block-assembly process, the blocks are honed and shaped by robotic tools as the conveyor pushes them through the cells. The area gets clogged with aluminum shavings and fluids used in the cutting and lubrication. In this case, many years’ worth of accumulated debris needed to be cleared away within an eight-day window.

MPW managers consulted with their co-workers at the other location to ensure they could deliver the same speed and quality in their cleaning process. Facility regulations did not allow for power washing or vacuum trucks in the block line area, so MPW utilized smaller vacuums and clean-by-hand techniques such as scrubbing and mopping on the assembly line and the adjacent floor.

MPW also adapted and improvised to overcome other complicating factors beyond MPW’s control such as:

MPW disassembled the assembly line cells, thoroughly cleaned the interior, re-assembled them and then cleaned the
exterior of the area, which includes a metal conveyor.

MPW’s sales managers and project managers helped technicians with this process to make sure MPW met the customer’s eight-day deadline.

After MPW completed the project, the client’s Environmental Facilities Manager said the difference in clean was “like night and day.” The manager also said the line, which was 14 years old, “looked only 1 year old, but it’s impossible for an engine assembly block line to look new after 14 years of use.”

MPW’s Facility & Environmental Management team proved it can manage new projects on the fly by acclimating and innovating, even when it is not possible to solve problems via technology or  equipment.