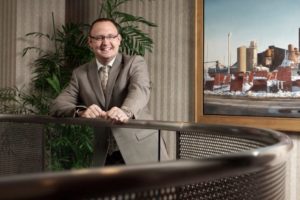 Justin Pierce is responsible for MPW’s technology and fabrication capabilities companywide, leading a team that includes chemical, mechanical and civil engineers as well as project managers and fabricators.

He began at MPW in 2006 as a co-op employee while pursuing his degree in engineering management at Ohio University. Upon graduation, he accepted a full-time position as a project engineer. In 2007, Justin was promoted to engineering supervisor, and in 2013 he was named director of engineering for the Industrial Water Division. He was named to his current position in 2016.

Justin led the design and development of the industry’s first combined reverse osmosis, ultrafiltration mobile trailer, which MPW introduced in 2016. He also directed construction of MPW’s regeneration plant in Port Arthur, Texas, in 2012, and was the technical lead for the Georgetown, S.C., plant, which opened in 2017.

Justin is an adviser to the Central Ohio Technical College and a former member of the advisory board for the International Water Conference. He is also a member of the American Society of Mechanical Engineers.

Q & A with Justin Pierce