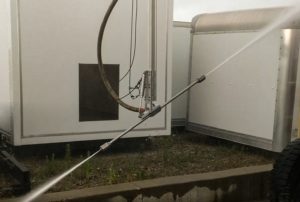 At a waste-to-energy facility in the Midwest, an industrial cleaning contractor was using a series of mechanical winches to remove pluggage and ash deposits from the boiler tube lanes which span the mud drum and steam drum. Two technicians would control the winch while a third tech functioned as a spotter. The process involved a high potential for errors associated with “eyeballing” the cleaning process and manual movement of the tool.

MPW engineers and operations personnel knew they could devise and implement an automated process that would be safer, more efficient and more precise.

MPW went into planning and developed a more advanced tool. After numerous trials and modifications, MPW’s automated system involved only one technician, who would operate the machinery via levers on a control box. There is no need for spotters or extra personnel to enter the jetting area. Essentially, MPW created a larger version of its X-Y Water Jetting System, which automates the cleaning of horizontal or vertical tube bundles.

MPW’s new equipment utilizes a 20k psi water jet with two customized 2D and 3D heads that are driven by a pneumatic cylinder which propels the head in a “teetering” motion to remove slag and other buildup. The tool spans the entire 33-foot boiler, indexing between each boiler tube. The cleaning heads can also be customized for site-specific requirements. The tool is useful in any circumstance that requires a span of up to 40 feet and limited support-placement options.

MPW’s automated dual-axis boiler cleaner decreased the plant’s downtime by about 12 hours compared to previous methods. Due to the success of this project, the plant named MPW its sole provider of water jetting services.

The client was impressed with the increased efficiency, safety and control of the automated tool. After witnessing the equipment in action, a plant manager said it’s one of the most effective automated-tooling systems he’s seen. He was also impressed with MPW’s persistence in making continuous improvements to the system.

MPW was not involved in any safety-related incidents during this project.