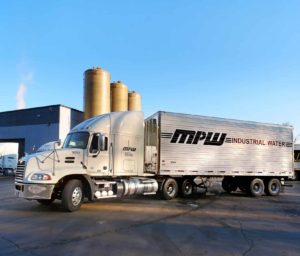 When a production plant for a large automotive manufacturer in Michigan suddenly lost its ability to produce ultra-pure water, MPW quickly provided the solution.

One of two pumps in the plant’s permanent Reverse Osmosis (RO) system failed. Without ultrapure water, the plant could not properly prepare its auto chassis for the painting process.

The replacement pump was on back-order and had to be shipped from China. With a delivery date three months out, the auto maker called MPW’s emergency-response number.

The plant was able to rely on its storage tank while MPW’s units were in-transit. Within 12 hours, MPW delivered Mobile Deionization (DI) trailers, preventing the line from shutting down.

While the plant’s system operated at approximately half its previous capability, MPW’s DI units were each able to produce one million gallons of ultrapure water every 10 days. MPW kept a trailer onsite and operational for the three-month period.

MPW’s DI units are twice as large as its competitors’ trailers, which increases efficiency by limiting switch-outs.

Delivery and implementation of MPW’s units went off without a hitch, despite the fact that it was the first time MPW sent Mobile DI trailers to this location.

MPW safely produced approximately 13 million gallons of ultrapure water for the site over the three-month timeframe.

Most important, automotive production lines ran uninterrupted and the manufacturer was able to produce thou-sands of cars during MPW’s emergency response. MPW literally saved its client millions of dollars.