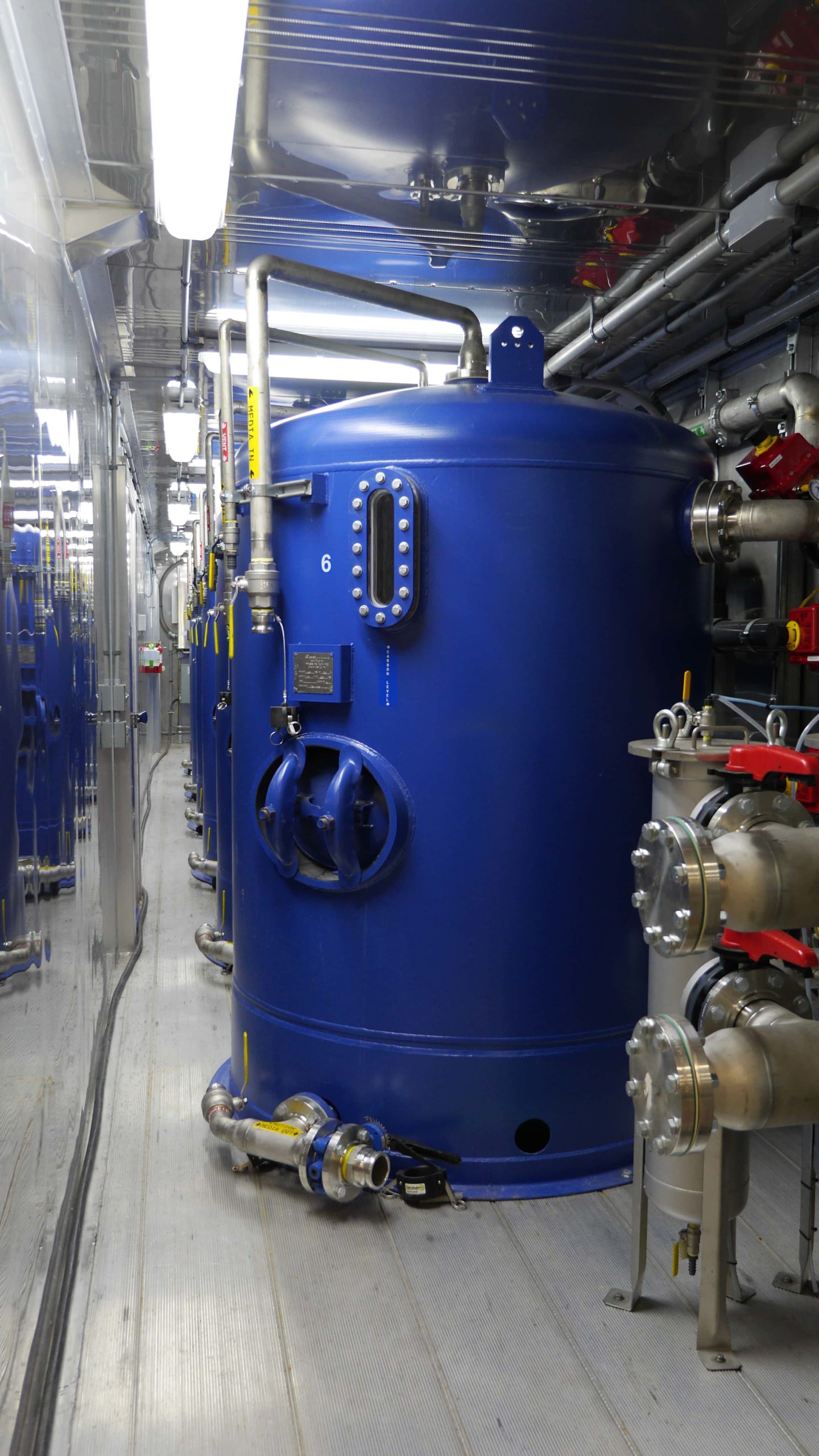 It did not take a structural engineer to realize the Pennsylvania pulp and paper’s clarifier required repairs. When the technicians from MPW Industrial Services arrived at the mill, steel I-beams were propped gainst the crumbling cement sides of the 1950s-era water purification system.

Next to wood, water is one of the most important supplies necessary for making paper. According to the American Forest and Paper Assn., U.S. paper manufacturers use approximately 6 gal of water for every pound of paper, meaning the ream of paper regularly placed in printers requires approximately the amount of water that the typical American uses to take more than two showers.

Water at paper mills is used for a variety of purposes, such as the washing and transporting of pulp and the dilution and preparation of process chemicals. Water also is needed for the generation of steam for electricity, conveyance of raw materials throughout the mill. and cleaning and cooling of machinery and equipment.  The Pennsylvania mill that contacted MPW draws approximately 8.000 gal of river water per minute and addresses its turbidity with two clarifiers. While workers repaired the failing clarifier. MPW purified enough water to keep the facility running.

At the mill, each gallon of water is used approximately 10 times, meaning it is important that the river water brought in is treated correctly. Although 90% of the water the mill uses is returned to its watershed and most of the remaining water returns to the atmosphere through evaporation. Papermakers worldwide, including the Pennsylvania mill, have been reducing their water use. From 2005 and 2014. for example. U.S. pulp and paper mills trimmed their water intake by more than 6%. In addition to improving their environmental sustainability. mills are keenly aware the water is not free when the costs associated with pumping, filtering. demineralizing, heating, treating and other process activities are included.  The focus on reducing operating costs is a top priority for pulp and paper mills in the U.S. because domestic demand for paper products is on the decline, especially in the last five years. Online technologies have dramatically changed the way information is recorded, shared and consumed.

Global demand for pulp, the building block for the manufacture of paper, meanwhile, has steadily grown in recent years, driven largely by the strength of Asian economies and developing nations. This partially has offset the economic impact from the shrinking domestic demand for paper products in U.S., which remains the world’s leading producer of pulp. Chinese manufacturers, however, have supplanted the U.S. as the world’s largest producer of paper.

Research firm IBIS estimates that for every dollar spent on labor, the U.S. paper industry spends approximately 25 cents on capital, such as repairs and modifica­tions to existing equipment. Wholesale purchases of new machinery are infre­quent. Amid this challenging economic environment, the Pennsylvania mill could not afford to curtail operations for an extended period while one of its clarifiers was repaired.

Less than 24 hours after being contacted, MPW dispatched four media filtration trailers to the mill, which were placed at the facility’s two most important areas determined by plant management. Two were used as filters for water entering the facility’s deionization system for the generation of condensate for boilers throughout the plant. The other two filtration trailers purified water for the mill’s fiber line, which is a critical step in paper manufacturing.

The fiber line converts logs to wood pulp, which is a water-based solution that includes cellulose wood fibers from which paper is manufactured. Logs first pass through a debarking drum. The bark is then collected and burned in a boiler to produce steam. Debarked logs, meanwhile, are fed into a chipper, which reduces them into small chips that are loaded into digesters. There, the chips are boiled at high pressure in a solution of sodium hydroxide and sodium sulfide. The resulting pulp then is removed so the cellulose fibers can separate from the dissolved chemicals and then wash with water to remove dissolved chemicals. Of course, finding parking space for four tractor trailers at the mill built more than 100 years ago was no simple task. Nestled in a valley next to a river, the mill offered limited areas to situate the trailers. Each trailer included six 90-cu-ft tanks with 60 cu ft of carbon. Extension cords from electrical outlets in the mill provided the 120 VDC necessary to power each trailer.

MPW strung 6-in. hoses from each trailer 400 to 500 ft horizontally and 20 to 30 ft vertically. Additionally, it installed as many as 30 fittings, including 90-degree angle and T-joints, so the hoses could navigate the many turns the routing required. Multiple kinks in the lay-flat hoses leading from the trailers would have reduced water pressure. In conjunction with mill workers and operators, two technicians from MPW successfully installed its trailers in approximately 36 hours after MPW received the call from the mill on a Friday evening. MPW treated approximately 180 million gallons during its three-month deployment at the mill, consistently generating less than l NTU product water. The use of inline turbidity meters assured the water met requirements. In addition, technicians used hand-held meters during the system setup. Further­more, alarms in each trailer would shut down filtration operations if the effluent did not meet specifications and automatically notify the field service technician.

Automated chemical injections permitted real-time adjustments to coagulant dosages in response to continually changing feedwater quality. Double-walled tanks of aluminum sulfate were on board each trailer to address  the mud, leaves, tree branches and other biological elements inherent in river water. Fortunately, during MPW’s assignment, intake averaged approximately 10 NTU with a rare spike of20 NTU.  MPW’s trailers featured an automatic backwash function. Every eight to 12 hours, one of the six tanks on each trailer would backwash until all had purged their filters. The backwash from all trailers was sent to the mill’s wastewater treatment plant.

When repairs to the clarifier were complete, technicians from MPW assisted mill workers in making a seamless transition back to the facility’s permanent water purification processes. As a result of the rapid deploy­ment and installation of the filtration trailers, the mill minimized the impact on its production and remains competitive in a challenging global industry. i’WWD

David Slipko is area sales manager for MPW Industrial Services. Slipko can be reached at 800.842.4355 or dslipko@mpwservices.com.