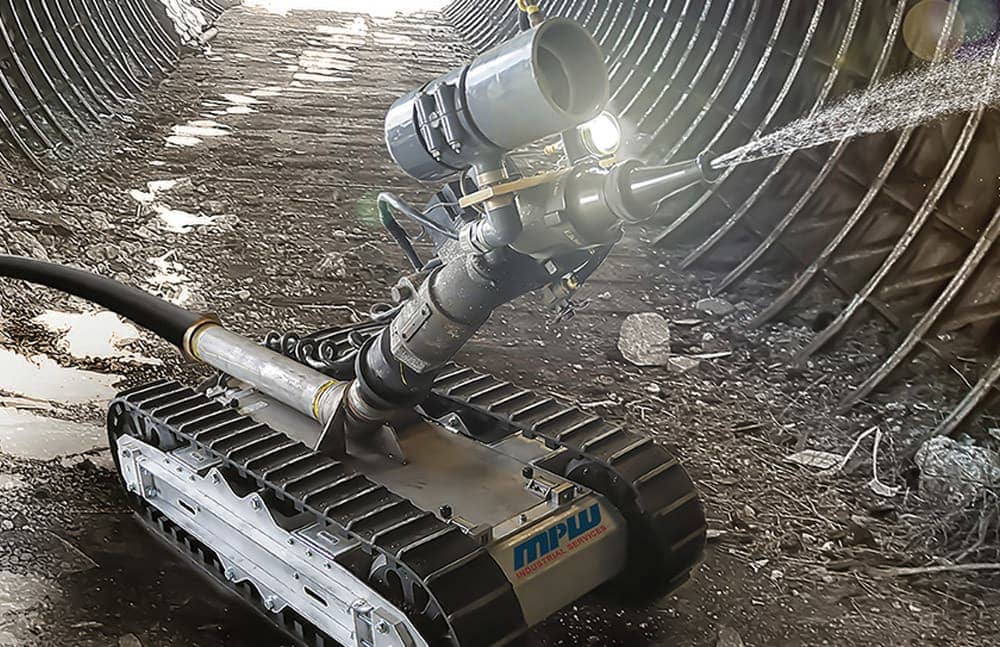 An Ohio coal-fired power plant faced safety and efficiency concerns when cleaning fly ash from duct work.The ducts, which are 12 feet wide and 12 to 14 feet high, present all the safety and productivity challenges of confined space work.

The fly ash buildup ranged from 2 feet to 8 feet deep at temperatures from 600 to 800 degrees. The deeper the pile, the more dangerous it is to spray.

MPW engineers and fabricators designed and built a remote-controlled robotic blaster, named RB X-40, to eliminate the need for workers to enter these dangerous situations.

The RB X-40 is attached to the inside of a door, facing the area where the fly ash has accumulated. It is placed on a track, giving it the ability to move left, right, up or down. The operator monitors the cleaning process via video monitor and controls the aim and spray nozzle with a controller that works similar to a joystick.

The RB X-40 sprays water at a high flow rate and a relatively low pressure (approximately 300 PSI), which is the most common process for fly ash washing. It can also operate at higher pressures and flow rates.

Cameras and lights on the unit allow the operator to see inside dark and debris-filled areas. It can operate inside any confined space and blast almost any material. There are two key parts in RB X-40’s functionality: the video monitor, which utilizes technology originally designed for the fire-rescue industry, and a spray-mist mechanism that keeps the camera clean.

RB X-40 also increases efficiency by eradicating procedures that are necessitated when a technician has to enter the confined space. The result is a shorter outage for the customer.

Additionally, the plant keeps its boilers on-line longer as a result of the increased quality of RB X-40’s cleanings.

MPW uses RB X-40 virtually anywhere and removes virtually any material. MPW engineers also developed a mobile robotic base (the M1 Crawler) that is used instead of attaching it to a fixed spot. A vacuum or a lance machine can also be added to the M1 Crawler.