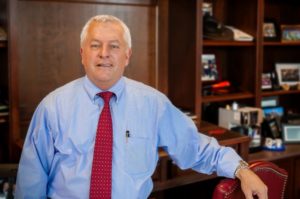 Jim Neville’s career at MPW began in 2002 as the General Manager of the Container Management Division. He utilized over 20 years of automotive management experience to develop a strong team focused on safety, metric management, the value of people and customer responsiveness. Since that assignment he has exacted high standards in a leadership role within each Business Unit of MPW. In 2010, MPW Owner/CEO Monte Black named Jim Chief Operating Officer, citing his credibility, management and passion for success. Safety, which has always been one of Jim’s core values, is a critical component to the MPW culture. Jim was named Executive Vice President Sales and Marketing in November, 2015.

Upon graduation from Pennsylvania State University in 1981, Jim joined the Delco Chassis Division of General Motors in Rochester, N.Y. Delco Chassis was one of the largest component divisions of General Motors, producing fractional horsepower motors, shock absorber/strut assemblies, and coil springs. Over the next 22 years and through two acquisitions he broadened his experience and knowledge by working multiple staff areas in several geographic locations. His assignments included frequent travel to China, Mexico, Canada, France and Germany.