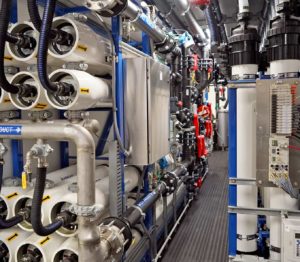 The ability to treat greywater is becoming vitally important to U.S. power producers. Energy companies in 19 states are using reclaimed water and the trend is expected to continue in light of larger populations, extreme weather patterns and rising demand for freshwater. Furthermore, greywater, which is wastewater from bathroom sinks, showers, tubs and washing machines, can cost one-half to one-third as much as potable water.

For these reasons, the new treatment system at a peaking power plant in the Southeast U.S. had to support the continued use of municipal greywater.

The plant can use either natural gas or oil to fire its combustion turbines, which operate only when demand from customers is at its greatest, such as afternoons in the summer months. As a result, the turbines are designed to start quickly and operate for a short time.

When in operation, the turbines require water to be injected into their combustion chambers to minimize nitrogen oxides emissions and keep the plant in compliance with environmental standards. The plant also maintains water storage of roughly 3 million gallons to ensure the injection process can support the facility’s environmental commitments if it opts to power its turbines with oil, which requires significantly more water than powering them with natural gas.

Regardless of fuel source, water purity is critical because contaminants can cause deposits or corrosion on the turbine surfaces, especially the blades. An unplanned outage because of poor water quality at a time when power demand is high can be costly.

The challenge was to install a new treatment system that could meet the power plant’s water quality requirements through the use of municipal greywater and save on operating costs.

MPW Industrial Services was awarded a service contract to build, own, operate and maintain a system on site. Installation, testing and startup of the ultrafiltration (UF)-reverse osmosis (RO)-demineralization system were completed in fewer than 30 days in mid-year 2009.

Unlike the previous treatment system, which used a coagulation filtration process, the UF process efficiently removes biological materials, which can impact turbine performance, from greywater.

The greywater enters the system with a turbidity of 5 ntu and undergoes UF through a polyvinylidene fluoride hollow-fiber membrane.

The water then moves through a two-pass RO system, which is designed to remove dissolved solids. This process step uses semi-permeable membranes to separate water into two streams. Permeate is sent to the next stage in the process, demineralization. The balance of the water concentrate waste stream—is sent to the wastewater equalization tank, where it is checked for pH.

The permeate is subjected to demineralization before it refills the storage tank. This process step uses ion exchange to ensure critical water quality requirements are met. Regeneration of the demineralization system is conducted offsite. Approximately six times a year, technicians hook up a replacement trailer and then transport the used trailer to an offsite regeneration facility. As a result, there is no regeneration waste stream. In addition, offsite regeneration minimizes the storage and handling of chemicals at the plant.

The entire system has a flow rate of 200 gal per minute (gpm), but can ramp up to 400 gpm during peak demand.

Design changes from the previous treatment system, meanwhile, reduced energy requirements significantly. The use of variable-speed, drive-controlled motors match the horsepower with the flow requirements for each step in the process.

The system can be operated remotely by a smartphone, laptop or tablet, which means an employee does not need to be on site to monitor it 24 hours a day.

As a result, one full-time employee monitors operations at the power plant and as many as three other nearby facilities.

Cost savings were realized almost from day one.

First, under the service contract, the risk of operating the treatment system and potential cost impacts were transferred to the supplier.

Finally, the power plant continues to treat greywater and has not missed a call for power since the UF-RO-demineralization system was installed six years ago.