Purifying in the Cold

Making this job challenging, however, was the fact that color units for the surface feedwater ranged from 180 to 420 units, well in excess of the treated water requirement of 5 or fewer units.

Trees, leaves and other organic matter continually decay in the surface water that feeds the plant, creating a liquid that looks more like weak tea than lake or river water.

The decay, or “brewing” of organic matter, is so significant in the lagoon that simple mechanical filtration cannot meet the stringent color requirements of a high-pressure system.

Failing to improve the water’s color would turn the organic matter into acids when heated and potentially corrode the power plant’s boilers.

The high organics level also factored in another substantial challenge of a low pH and very low alkalinity levels. Typical filtration coagulants generally function best in higher pH ranges and consume alkalinity in the process. Moreover, the mobile water purification needed to be conducted at times when the water temperature would be approaching the freezing point. As a result, this reduced the effectiveness and all but ruled out the use of traditional metal-based coagulants such as alum and iron salts in the pretreatment process.

Another challenging factor was the fact the turbidity was fairly low, ranging from 1 to 10 ntu. In most water purification processes, the lack of suspended solids generally makes for easier processing. That is because the particles can be filtered out mechanically and good portions of the color would be removed in conjunction via this process. In this case, the lack of mechanically filterable material made removing the high color background extremely challenging.

The conductivity was on the low side for feedwater, ranging from 70 to 100, so the mobile demineralization portion was straightforward, but the remote location of the site had to be a consideration given the stringent water quality requirements of less than 10 ppb of silica and less than 0.1 μmho of conductivity. 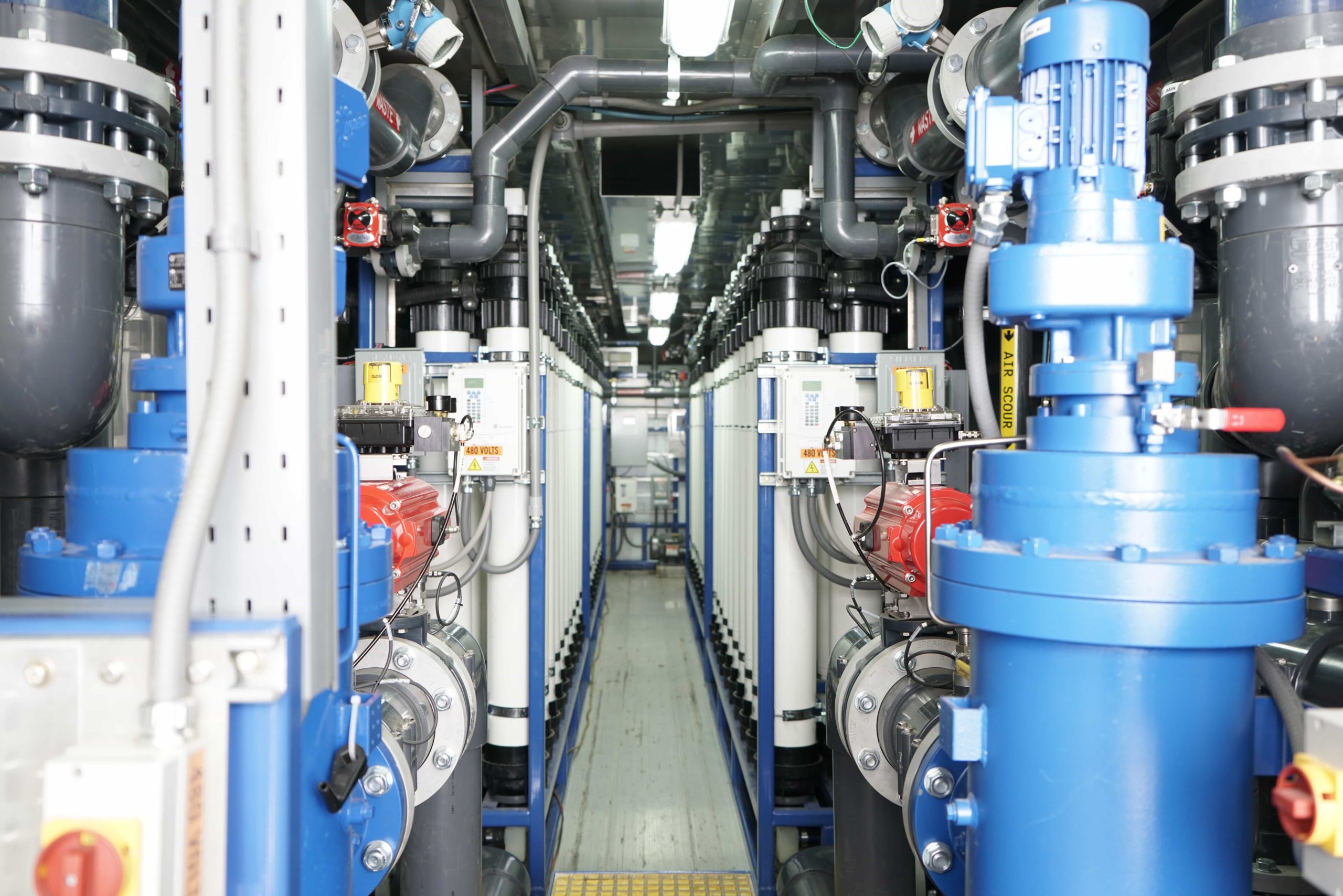 When MPW Industrial Services was awarded the contract, it was faced with the challenge of designing and installing a temporary system that met the plant’s requirements for ultrapure demineralized water at a maximum flow rate of 600 gpm—in less than four weeks, and beginning in the middle of winter. MPW’s technical team immediately began evaluating chemical pretreatments that could work under extremely cold water conditions.

After a series of jar test experiments using samples of the power plant’s feedwater, engineers determined aluminum chlorohydrate (ACH) was the best choice for treating the raw water before it was processed in MPW’s mobile ultrafiltration and demineralization trailers. The ACH, a coagulant, would bind with the microscopic organic matter, creating a floc that could be more readily removed via ultrafiltration. To monitor the performance of the ACH, technicians installed a sensor that provided real-time data onsite and via Internet-enabled access. In addition, the monitoring unit enabled technicians to make adjustments to the ACH levels as needed, even remotely, 24 hours a day.

A key consideration in the selection of ACH was its ability to react with the organic matter in rapid fashion even in extremely cold water. As a result, this enabled MPW to maintain 20,000-gal tank of feedwater and an onsite presence of just four trailers versus the plant’s permanent water purification system, consisting of a full-size clarifier and large in-house demineralization systems contained in a warehouse-sized facility. To ensure the purification system would operate under extreme weather conditions, MPW heat traced and insulated all the exterior pipes and hoses leading to and from its mobile units. This was in addition to the built-in heating systems in the trailers.

Despite the significant accumulation of organic material causing discolored water, and despite the cold weather conditions, the purification system enabled the power plant to complete its commissioning, troubleshooting and repairs in a timely manner. All operations were automatically controlled via custom programming in the onboard control system. An MPW field-service technician monitored the system 24/7 to make performance adjustments and modulate production flows as needed by the plant. No routine operations of the entire system required technician interaction because the system was completely automated.

During the approximately one-year assignment, the color units ranged from 1 to 3 for the ultrapure process and boiler feedwater the plant required. Turbidity was reduced to less than 0.3 ntu. In all, the demineralization trailers produced approximately 2.5 million gal per trailer and kept conductivity measurements well below customer specifications. MPW was able to provide on-demand flow rate changes as required by the customer during its troubleshooting process. Certain days would require full flow operations and others would range from zero to 600 gpm with flow changes several times per shift. Flow cycling is generally problematic for coagulation processes, but the membrane-based ultrafiltration process can easily handle starts and stops, plus extremely variable solids levels.

At a certain point, the customer became comfortable enough with the system’s operations and reliability that the plant proceeded into a deeper, unanticipated investigation and repair. The plant shut its system down completely and relied on the mobile system as the sole source water for its boilers. Typically, the plant would have had to wait for a complete plant outage to address such an issue in its water treatment process.