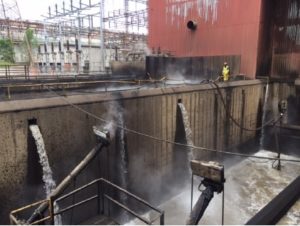 A serious obstacle involved in the continuous casting steel-production process is the presence of scale in cooling water, which is discharged from the mill into scale pits where the heavier solid particles settle out. When high levels of scale occur, the equipment in the system becomes fouled and overtaxed, leading to costly production losses via downturns or even outages. So when a water-treatment contractor working at a Midwestern steel-production facility needed to remedy a long-standing issue in keeping the caster online between downturns due to scale buildup, it required an industrial cleaning partner that had the experience and technical capabilities to design and execute a scale-removal process that could operate without creating a halt or slowdown in production. That partner was MPW Industrial Services.

Experts from MPW’s Industrial Cleaning and Industrial Water teams combined to devise a system that would allow the scale to separate from the water more efficiently. MPW’s plan centered on a hydraulic submersible slurry pump with an agitator, which would be operated with a diesel-powered power pack. Specs of the pump included:

Following is MPW’s dewatering sequence for the project:

A key to the success of the project was the use of an 80-foot by 24-foot dewatering pad to remove the scale. Filtered mesh covered drain holes in the side of the tank to filter the water. The system included an auger to separate solids and a clamshell crane for digging applications. When the pump was lowered into the scale pit, it maintained the necessary depth for the scale to achieve a settling time of 25 to 30 minutes, which effectively separated the scale from the cooling water.

MPW’s unique dewatering system significantly reduced scale buildup, creating uptime and increasing efficiency, thereby producing more steel. The improvement benefitted the water-treatment contractor and the steel-production facility. According to managers with the contractor and the steel-production facility, MPW’s solution worked better than expected. All feedback about MPW’s work on this project was extremely positive and there were zero safety incidents.