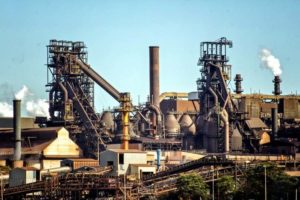 A steel plant located in Southwestern Ohio recently constructed a new tar tank to replace its old 700,000 gallon tar tank. The decommissioned tank had been out of service since 2008. The plant wanted the tank and its contents of tar, sand and other debris removed from the site. As a result, the plant bid out a quote to have it cleaned and removed.

The job entailed several safety hazards—tar is considered a hazardous material and removal of tar must be done carefully in order to contain it to a specific area. Tank integrity was also a large concern as the plant personnel were unable to effectively inspect all areas of the massive tank, fearing that falling material could present a hazard.

Adding to the complexity of the project, MPW workers were unable to see inside the surrounding containment as it was covered in thick tar.

In the past, MPW’s services at this location were geared toward industrial cleaning. Gradually, MPW earned the opportunity to operate heavy equipment such as front-end loaders, 35-ton Euclid trucks, graders, water trucks, semis, dump trucks, etc. Today, MPW plows snow, cuts grass, repairs railroad tracks at one section of the plant, and provides labor support for the Basic Oxygen Furnace and operates bobcats and forklifts.

MPW’s team had experience with similar jobs, and submitted a bid to clean and remove the tank. MPW suggested subcontracting the cutting of the tank to an excavation specialist, which the customer accepted without hesitation.

MPW won the bid due to the relationship between the plant and MPW crews, as well as management, their attention to safety, and of course the fair pricing.

MPW used 40,000 psi water blasting to clean and remove the tar from the tank. The tank needed to be free of all tar and debris, so cleaning the tank was vital for the excavating contractor to be able to dissect and dispose of the tank. The entire tank, including the double floors, was salvaged, with the exception of the tank’s suction line. The job took MPW six weeks to complete.

There ended up being a considerable amount of tar that was not expected. In all, six boxes of hazardous tar and debris weighing approximately 35,000 pounds each were removed from the tank.

With support from the corporate office and the determination of the employees and managers at MPW, the job was completed in a timely manner with no safety or environmental issues. MPW believes it won the bid because its bid was substantially less expensive than other bids. MPW mitigated all safety risks by effectively analyzing the complexity of the job and adhering to its detailed plan of execution.