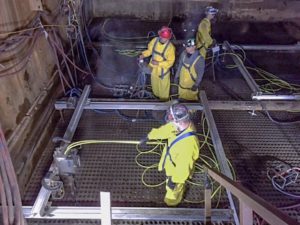 A coal-fired power plant in West Virginia faced the problems of operational space shortage and excessive safety hazards during its chaotic spring outage.

With an excess of people and equipment working simultaneously, the power station sought methods that would reduce man-hours, improve safety and upgrade efficiency.

The tubular air heater cleanse was only a part of MPW’s work during this outage, which was the most comprehensive in terms of both scope and revenue in MPW’s 40-plus-year history. However, the air heater project was such a resounding success that it merits its own report.

The tubular air heater at this facility consists of 26,000 individual tubes, each 40 feet in length. Previous contractors had technicians inserting and withdrawing manual lances into each tube of the air heater, which is dangerous and has led to multiple injuries in the past.

Despite logistical complications such as pumps and vacuum trucks that were forced to run up to 300 feet of hose to complete their work, MPW operations and engineering managers designed and executed MPW’s safer, more efficient system. That system included eight pumps, four triple lance machines (MAL-3) and four single lance machines (SAL-1). These automated tube lancing systems produce a constant and consistent clean throughout the entire length of each tube.

Utilizing air motors, these systems drive the lance forward and pull the lance back under pressure. The MAL-3 is a fully automated system that is operated remotely from a PLC-controlled station, removing the operator from the jetting area and completely eliminating safety risks associated with the lance-withdrawal process.

The tubular air heater project took five days with ten 12-hour shifts. MPW reported zero safety incidents. After the cleaning, the plant immediately realized improved air heater efficiency, which is measured in Delta Pressure, or Delta P, which refers to the pressure drop across a piping component such as a valve or industrial filter. Plant officials said the air heater’s Delta P was equal to the readings when the plant was first commissioned.

The plant also reported that 98 percent of the tubes were completely cleaned, which was a significant increase in cleaning quality. (Logistical situations with some piping and structures make a 100-percent clean nearly impossible to attain at this location.)

Managers from the plant remarked in a post-project meeting with MPW that they were ecstatic with the increased safety and efficiency of MPW’s work. Compared against the previous contractor, MPW completed the tubular air heater cleaning with half the labor and in half the time, saving the client more than $70,000, not including any savings associated with the elimination of injuries.