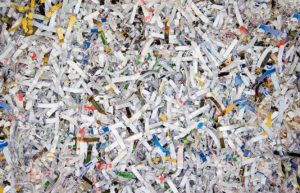 A document-shredding facility in Texas faced a significant buildup of combustible dust on its walls, floors and rafters. As the paper was shredded and compacted into bales for later recycling, particles accumulated into a dangerous layer of combustible dust that was approximately one-half inch thick.

After responding to the potential customer’s request for quote, MPW performed a demonstration at the site. During this time, MPW managers learned more about the project and viewed the facility firsthand.

MPW agreed to clean the facility’s floors, walls and rafters. The project would consist mostly of manual work such as brushing, sweeping and vacuuming. The amount of dust made it necessary for workers to wear respirators.

Complicating the process were areas that were difficult to access due to equipment, such as a compactor, blades and a process line. MPW used scissor lifts to reach these areas, as well as the ceiling. MPW workers dusted vertical surfaces using anti-static wall dusters, while utilizing HEPA-certified backpack vacuums on horizontal surfaces to minimize airborne dust. Workers used mops to clean the concrete flooring.

MPW encountered zero safety incidents during this project and the facility returned to full production the day after the combustible dust was removed.