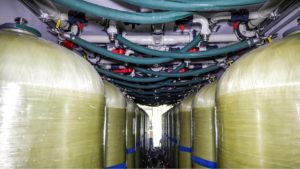 Nearly 15 million gallons of high purity deionized water were required to support a series of steam blows at a 2,800 MW Southeastern U.S. power generation station. These steam blows were associated with the startup testing of four combustion turbines (CTs) to expand the capacity of the generation station. The success of the steam blows was a necessity for the acceptance of the four CTs developed and built by the EPC (Engineering, Procurement, and Construction) firm.

Precommissioning steam blows are essential to remove foreign particles from new power systems. Large quantities of steam must be purged through the system and directed away from sensitive turbine blades as a requirement prior to startup. The ultra-pure water utilized for such steam blows must meet stringent quality specifications including silica levels less than 10 ppb (parts per billion).

As an additional challenge, the water level in the power station’s feed-water storage tank could not be allowed to fall below 50 percent full at any given time. In the event of such an occurrence, the power station dictated the steam blow would be terminated immediately to allow the tank level to increase. This mandate was enforced because other units onsite were producing electricity and required the high purity feed-water from the tank in order to remain on-line. Such an interruption to the steam blows would prove costly, complicated and time consuming for both the EPC firm and the power generation.

MPW specialists worked directly with the EPC firm and the power station to develop and implement a customized solution. A temporary system was designed and built to take strained lake water and process it to ultrapure water standards. This deionized (DI) water would then be transported directly to the feedwater storage tank to support the steam blow project.

After pretreatment, a series of parallel MPW mobile DI units were utilized to process the effluent from the mobile filtration trailers to the required standards. During the project, MPWâ€™s operations team continually delivered regenerated systems to the site to replace exhausted units, thus ensuring the water purification process would not be interrupted.

MPW also provided a mobile testing laboratory as a base headquarters for dedicated on-site staffing to monitor all aspects of the project, including real-time data generation to verify water quantity and quality parameters.

MPW team members worked for more than a month to complete the individual steam blows for each CT that culminated in a common 36-hour steam blow involving all four units. During the course of the extensive project, the MPW Water Management team produced a volume of ultra-pure water large enough to fill more than 15 Olympic sized swimming pools. Equally impressive was the fact the feed-water tank never fell below the 50 percent threshold at any point during the job.

MPW’s unique mobile DI design played a critical role in exceeding the customer’s expectations. Utilization of MPW’s high capacity, 10 million grain DI trailers meant MPW needed only half the number of trailers that would have been required by competitors to complete the job successfully. In the end, MPW was chosen over competitors that were geographically closer because of its superior equipment, outstanding technical expertise, and customer-first approach.

The successful execution led to substantial benefits for the EPC firm and the power generation station including reduced logistics costs, faster project completion, no reshuffling of workloads, and a smaller on-site footprint.