Americans were moving to the suburbs, Ray Kroc launched the McDonald’s restaurant chain and Elvis Presley was an international sensation when continuous casting was introduced in the manufacture of steel. Since the process revolutionized the steel industry in the 1950s, engineers have continually perfected the technology. Sixty-plus years of increased production rates, however, have placed a significant strain on the treatment of cooling water for reuse in the casting process.

The primary requirement for the recycling of cooling water is to eliminate the scale and other total suspended solids (TSS) that accumulate during the cooling of molten steel. Scale is produced when the heated steel is exposed to oxygen, creating a tough gray or black coating on the surface. To remove the scale, a Midwestern manufacturer sends its process water to a large pit where the oxidized metal can settle to the bottom, which is a common practice in the steel industry. The water is decanted and then sent to sand filters to remove any residual scale and TSS. The water is then sent to cooling towers and back to the caster spray water cooling process.

Increased production rates at the plant mean that water is being sent to the settling pit at an increased flow rate. Therefore, scale is accumulating at the bottom of the scale pit much faster than the original design rate, compromising the effectiveness of the settling process. 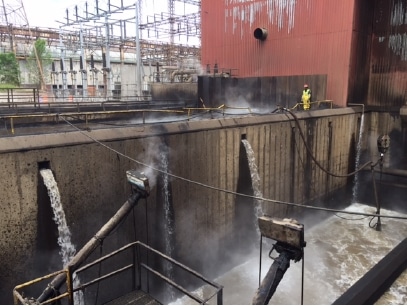 The plant’s settling process was designed for water entering the pit to take approximately 35 minutes to travel the length of the 80-foot tank before entering the sand filters. This would provide enough time for the scale to react with a flocculent and fall to the bottom of the 12-footdeep tank.

Today water travels from one end of the pit to the other sometimes in as few as six or seven minutes, in part, because scale accumulations at the bottom of the tank often exceed 9 feet, effectively reducing the capacity of the settling pit. Optimal settling occurs when scale accumulations are 5 feet or less. To address the scale buildup, workers periodically dug scale out of the pit with a clamshell excavator while the plant was in operation. Though successful in dredging the pit, this technique created an increase in the amount of scale and TSS overflowing the pit and being sent to the sand filters, effectively negating the settling process.

The turbidity during the excavation was as high as 200 to 500 Nephelometric Turbidity Units (NTU), placing an unacceptable burden on the sand filters. This also resulted in TSS levels that had the potential to damage the caster spray water cooling process. Cooling water is sprayed on the molten steel exiting the caster mold with fine-tipped nozzles. Any buildup in the nozzles could limit the flow and proper distribution of the cooling water, resulting in inadequate cooling of the molten steel. This has the potential to disrupt the manufacturing process. Next, plant management turned to its water treatment supplier, which recommended a change in chemistry that enabled the TSS coagulation to occur at a faster rate. This, however, only increased the volume of scale in the pit.

As a result, plant management and the water treatment company turned to MPW Industrial Services for a solution. Engineers from MPW’s industrial cleaning and water purification divisions evaluated the plant’s production requirements and the settling process.
Working as a team, MPW, the steel manufacturer and its water treatment supplier quickly determined that a submersible slurry pump lowered into the settling pit could remove the scale. This slurry pump includes an auger that loosens up the scale lumped at the bottom of the pit and pulls it toward the pump without kicking up any appreciable scale in the pit.

The pump and auger are lowered into the pit with a crane on average three days per week depending on the plant’s production rates and the grade of steel being manufactured. The goal is to pump a 50-to-50 mix of water and scale to an adjacent dewatering pad while not allowing the NTU to exceed 50 in the pit. In one eight-hour shift, the pump and auger can remove approximately 30 percent more scale than the plant generates in a typical 24-hour period. Steelmaking production is now interrupted only when the continuous caster process requires routine maintenance, which is generally every five to seven weeks. Since the introduction of the pump and auger as well as the improved flocculent from the water treatment firm, no production delays have occurred because of excessive scale in the pit. Furthermore, MPW is developing ways to automate operation of the pump and auger. For example, MPW’s engineering team is designing the next phase of the project to include an overhead gantry that will allow for a more continuous scale removing process.

In addition to scale, cooling water from continuous casting contains oil and grease, both of which need to be removed before re-entering the process. Currently, the plant uses rope skimmers to rid the oil and grease from the surface of the water. Recently, MPW has been working with plant management and the water treatment firm to evaluate alternative, more efficient skimming technologies. The submersible slurry pump with auger might not rival Don Larsen’s perfect game or the opening of Disneyland, but for the management of a Midwestern steel plant, it’s certainly noteworthy in maintaining a landmark 1950s process that revolutionized the making of steel and remains the industry standard.