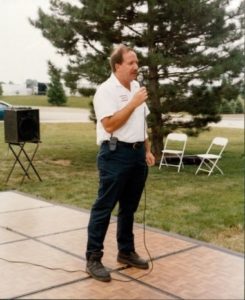 But if you call Bruns’ cellphone, his voicemail will tell you he still works for MPW. In a way, maybe he always will.

Bruns first met Monte Black in 1988 while interviewing for an Assistant Purchasing Manager position at MPW.

“I’m sitting there in what is now the ICG Building and a helicopter lands and out walks Monte,” said Bruns. “It was pretty impressive. The interview went well and we hit it off. Before I even started working, Monte told me to find my own replacement because he had other plans for me. Actually, that’s how my whole career went.”

“MPW management has invested in the company to achieve this growth and technological advancement,” Bruns said. “In the field, we were always on the leading edge because we were always supported 100 percent by Monte. In terms of our equipment, uniforms and professionalism, we’ve been seen as the gold standard by clients and competitors for a long time.”

Bruns enjoyed his time in data processing, but by the early 1990s, MPW needed help with Department of Transportation compliance. In what would become a central theme of his career, he was eager to help improve any aspect of the business.

“I found out MPW’s first-ever DOT audit didn’t go very well. Monte asked me if I could fix it. Before I worked at MPW I worked for a trucking company and I was familiar with DOT regulations, so I told him I would get it done. One year later MPW improved its DOT audit to the highest grade possible.”

Black said Bruns’ dedication and ability to mentor other employees made him invaluable in building MPW into what it is today.

“Kevin contributed to MPW’s success in multiple areas,” Black said. “He exemplifies customer service at its finest because he was always willing to give a little extra. He has an excellent attitude — whenever anyone asks him how he’s doing, he shouts ‘GREAT!’”

After his stint as Dispatch/Transportation Compliance Manager, Bruns moved into an Account Manager/Field Supervisor role in order to learn the operations side of the business. After about a year in the field, MPW named Bruns Area Manager of the Chillicothe branch, a role he said was his favorite during his MPW career, despite the 90-minute drive he had to make to and from the office every day.

The last three years of Bruns’ career have been dedicated to sales, a role he has been reluctant to completely abandon. He still keeps in contact with his former clients, co-workers and of course, Black.