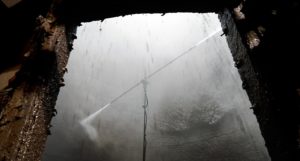 The towering smoke stacks affiliated with industrial settings such as steel mills actually serve an environmental purpose. Within these stacks, electrostatic smoke precipitators (ESPs) force smoke and gas past two electrical terminals — one with a negative voltage and the other with metal plates charged to a positive voltage. Since unlike charges attract, the negatively charged soot particles are attracted to the positively charged plates and stick there, rather than being released into the air.

A Midwestern steel-production facility faced the issue of unsafe conditions within its two ESP stacks. When the tubes within the stacks needed to be accessed for maintenance, workers and  equipment were at risk from falling debris, which was up to 2 feet thick in some places.

For years, cleaning the inside stacks had been done by contractors utilizing hand-lancing techniques, but this proved costly in terms of personnel and lost production due to downtime.

Contractors had attempted to use automated equipment to mitigate these costs, but they failed to improve the process and were forced to return to the hand-lancing methods.

MPW executives convinced their contacts at the mill to give MPW an opportunity to develop a safer, more efficient process.

MPW designed and built programmable winch carts. The current system includes nozzles that were designed with two heads on each side of a rotating rod extension. They are mounted at the top of the stack and lowered via the winch. An air-driven rotary motor with a gear box spins the rods, which deliver a consistent 20,000 psi water blast to clear any soot or debris.

The automated winch is a key to delivering a consistent, powerful spray that cleans all the way down to the refractory without inconsistencies or striping patterns that would need to be eliminated later via hand-held water blasters. After its initial cleanings, MPW refined the winch, which was operated manually in previous versions, as well as the nozzles and rod extension, which were optimized for the specific conditions of the stacks. The quality of clean achieved by MPW’s process also shortened future cleaning projects.

Two technicians work at the top of the stack, observing the winch and adjusting the up/down speed if needed. Technicians also observe from man doors located on floors 6 and 8. All technicians communicate using two-way radio during the process.

A rail car sits at the bottom of the stack collecting most of the solid debris. An industrial vacuum truck eliminates the liquid remnants.

Depending upon the plant’s outage schedule, MPW will clean the dual stacks either simultaneously or individually. Buildup within the stacks necessitates cleanings approximately nine times per year.

In the past, crews performing manual blasting needed 32 hours to clean the stacks. MPW’s initial attempts netted better results in just 12 hours. However, the team knew it could further improve through better communication with the plant and other contractors. In its most recent cleanings, MPW’s automated process reduced the project time to 8 hours.

This project benefited the client in the following ways: